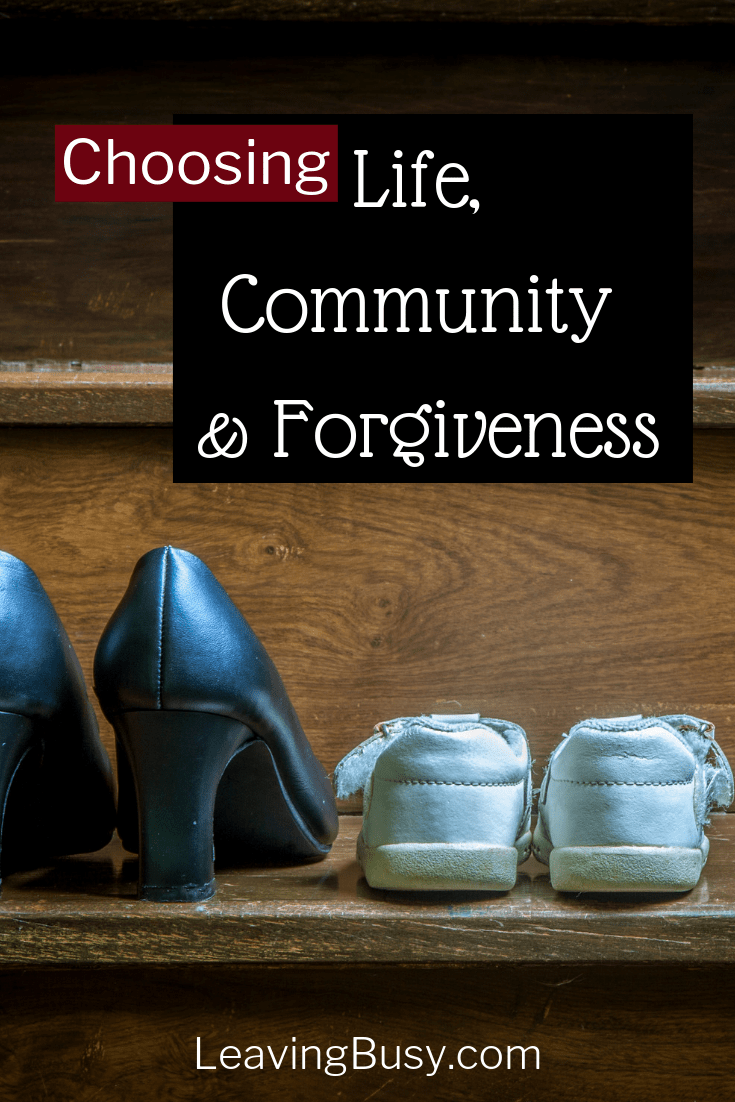 There is pro-choice rhetoric that claims pro-life advocates of having little interest in the wellbeing of mother and babe past the initial decision to decline abortion. This story is a celebration of the community that rallied around my mom and me in my first years of life, a violation of trust and innocence and how ultimately love and forgiveness overcomes all.

As I introduced, in my recent Father’s day article, my mom found herself expecting me at the tender age of 17. Thankfully she bravely decided against the suggestions of abortion or giving me up for adoption despite the pressures of others. It was a powerful choice and I am grateful for it. Despite my mom’s strength, the realities of working and raising a child alone were challenging.

Thankfully, we found ourselves part of church community who looked past my mother’s status and there were many loving people who rallied around my mom to assist her in caring for me.

There was a beautiful lady named “Nessie” who made me feel loved and welcome in her home. She had a vast collection of Red Rose Tea figurines that she allowed me to play with and I have memories of dressing up like a princess and playing outside with her neighbour’s children.

I also remember sneaking into her older son’s room and helping myself to his “Costco”-sized plastic jar of double-bubble gum. This was the era before Costco existed so now I wonder where he got such a large container of those delicious bubble-gum squares wrapped in comic strips. I was safe at Nessie’s.

There was a friend of my mom’s named “Jackie” who also doted on me and let me play with her dolls. I loved eating Kraft Dinner and she made it for me every single time. Jackie has remained in my life even until today and watched over my own children during their childhoods.

Our Pastor’s wife named “Sharon” watched me occasionally. I was friends with her children and I heard a story about how I was put down for a nap on the pastor’s bed and when they came to check on me, I had found a pair a scissors and cut up their bedspread! I hated to take naps and think I found a way to cope with the boredom!

There was also a spiritual mentor of my mom’s named “Myrtle” who watched me from time to time.

These were the main caregivers who cared for me during my early years but there were others in my fuzzy remembrance.

Among them was a predator. A teen I will call “Tracey” who my mom recalls as a neighbourhood acquaintance.

I was very young. Old enough to remember what was done to me but young enough not to be able to verbalize the abuse to my mother.

I remember sitting on a swing and when I realized my mother was going to leave me with this babysitter, I started to protest and cry but I didn’t have words to tell her why. It looked like typical childhood angst at being left behind.

I won’t get into the details of what Tracey did to me but it was wrong and I didn’t like it. She involved me in sexual activity alone and in the presence of her boyfriend. Oddly enough, I was never abused by a man even in that compromised situation.

I also remember being slapped, ignored when I asked to go to the washroom and punished when I soiled my hot pink sleeper as a result. I remember crying with shame, fear and feeling completely powerless. I recall being denied food when she was eating.

Fortunately, my sessions with this sitter were few. I only remember 2-3 incidents but all these years later those memories remain with me.

Some years later when attending a special service at the church we attended in that neighbourhood, I remember sitting outside with my uncle who was the same age as I was. I saw the girl who had done these things to me walking up to the doors and I pointed her out to him telling him the story.

I brought it up even more years later and he surprised me by saying that he had gone to my grandma with my story and she had “taken care of it”. I don’t know what happened. I never asked my grandma about it and she never spoke to me.

I brought up the incident to my mom a couple times when I was older but found it difficult to verbalize due to the sexual nature. It felt wrong to say the words.

I never went for therapy. We never discussed it. These were the days where sexual abuse of children was unheard of and society dealt with incidents privately and quietly to avoid scandal. The unspoken rule was that we were all supposed to pretend it didn’t happen at all.

It wasn’t something I talked about with adults. Only in whispered confidences to friends I felt safe with. I think that being abused that way by a woman added to the shame for me. “Normal” abuse came at the hands of men, not women.

By the time I became a parent, sexual abuse of children was part of societal awareness with many precautions being made for protection. Organizations and churches started screening employees and volunteers for past sexual abuse to ensure predators weren’t given access to children.

To say that I was hyper vigilant with my own children was an understatement. Our sitters had to have police clearances and I was watchful. I talked to my children at a young age about sexual abuse (in age-appropriate words). I believe they made it though childhood unscathed.

I’m unsure how that abuse has affected me. I don’t feel anger, fear, grief or shame anymore when I recall those incidents. It just is what it was. A casualty of an era where people trusted each other more than they do today.

Since I was never harmed by a man, my relationships with men are healthy. My fathers protected me and I feel safe with my husband. I count that as a blessing because so many precious girls are violated by men and it can haunt their male interactions ever after.

I don’t hate the girl who violated me. I don’t know what made her do those things to a young child but it’s likely she was an abuse victim herself. I hope she got help. I hope she forgave herself and went on to have a life free of abuse and abusing.

I believe that the faith I was raised in helped me thrive in spite of this harm during my development years. Faith gives us a place to take our shame and grief. Redemption gives us a place to be forgiven and to forgive others so we can be free. Faith shows us that we can let go of pain and trust that God is weaving a beautiful plan for our lives that incorporates even the ugly threads.

Have you been a victim of sexual abuse? Does it haunt you and distress you still?

I would recommend counselling as I am sure it would’ve been helpful to me as a young girl. Make sure you report it so the perpetrator be stopped and get help before they abuse others.

Since I found this very helpful, I would also recommend embracing faith which helps you process the pain from a higher perspective.

I also offer you my 4-Days to Forgiveness email series which gives you some simple, yet powerful steps to letting go of past hurts.

Please note that if you made regrettable choices in your past of any kind, you are not meant to stay in a place of condemnation. Many people shy away from embracing faith and active worship with other believers because doing so would continually remind them of a moral standard that they fell short of.

My invitation to the 4-Days to Forgiveness is there for you too because forgiving ourselves, making amends with those we have harmed and moving forward is important for everyone.

You are special. You are beautiful. You are precious.

Nothing that you’ve done or that someone did to you can diminish that.

To Nessie, Jackie, Pastor Sharon, Myrtle and the other angels who helped my mom by caring for me in my early years…thank you for showing me what trustworthy, loving care of another’s child is supposed to look like. Your hugs and smiles meant everything to me and I’ll never forget your kindness.

And finally, to my mom who decided my life was worth sacrificing her youth and personal freedom for. Thank you for choosing life, loving and raising me and embracing the faith community.

Here are some simple action steps you can take to get engaged with this article:

Kofi is a service that allows readers to show appreciation to creators by donating $3 (price of a typical cup of premium coffee). They don’t withhold any of the funds collected. This is an awesome way to support creators you love!

Join Me on Social Media!